Experience the idyllic regions within Gipuzkoa on this one-week circuit

The Idiazabal Cheese Route or GR 283 is a circuit promoted by the Department of Innovation, Rural Development and Tourism of the Gipuzkoa Provincial Government and approved by the Gipuzkoa Mountain Federation. It is made up of 6 stages and the entire circuit is 95.7 kilometres long. It has an accumulated gradient of 9,777 metres, with a positive gradient of 4,920 metres and a negative gradient of 4,867 metres. It is designed for the completion of one stage per day. It crosses the regions of Goierri, Alto Urola and Alto Deba.

The shortest stage of the route is 12 kilometres and the longest is 22.93 kilometres. At global level, the Idiazabal Cheese Route has an average level of difficulty; anyone with minimum physical conditioning can complete it and it does not require mountaineering or climbing equipment.

The minimum and maximum altitudes with respect to sea level are around 150 and 1,200 metres respectively.

The boundaries of the route to the north are Ordizia and Beasain, Zaldibia to the east, Legazpi and Oñati to the west, and to the south-west and south-east, the villages of northern Álava and Navarra respectively.

You will have the opportunity to learn about the production cycle of Idiazabal cheese from beginning to end, starting in the Natural Parks of Aralar and Aizkorri-Aratz where the latxa sheep graze, the cheese factories where it is made, the markets where it is sold, particularly that of Ordizia, and finally the town that gives it its name, Idiazabal.
In between, we have a broad offer of accommodation at the points where the stages end for you, made up of hotels, rural tourist accommodation and hostels, with excellent location and services.

We invite you to learn all the secrets of Goierri, explore with the extraordinary view of Txindoki, Larrunarri or the "Basque Matterhorn", and play sport as you gain a priceless, never-before-encountered culinary and cultural experience in an unparalleled landscape. 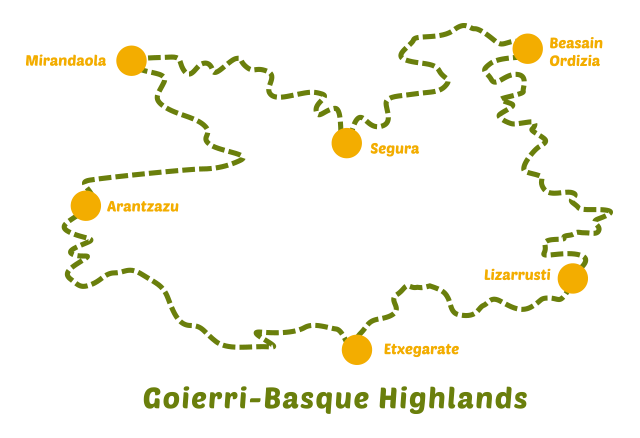